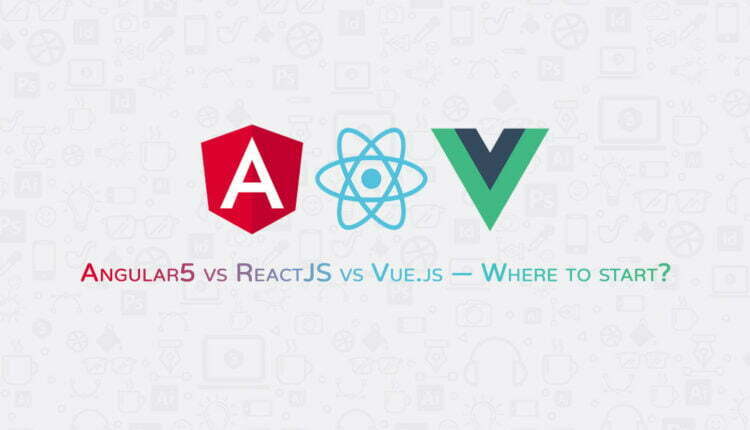 Angular5 vs ReactJS vs Vue.js — Where to start?

In this article, we will discuss the small comparison on Angular5 vs ReactJS vs Vue.js. And also discuss where to start for the new developers or beginners. JavaScript-based frameworks have been getting developed in different formats, functions, and standards at a tremendously fast pace. In fact, the result of which we get updated versions of ReactJS, Angular, and Vue.js recently. Still, the developers face confusion which one is right framework for their complex web projects.

Earlier, Angular.js won much popularity between 2013 and 2015, and later React.js earned better popularity than angular.js. But, Vue.js doesnt have that popular yet but slowly increasing.

Thus, we come to the conclusion that Angular.js and React.js can be alternate choice for the developers, who are in need of JavaScript frameworks. They perform dynamically up to equal proportion from the point of front-end design.

Since, both the equal and react has tremendous tools and web components to design and develop a customized web page, the developers can go with either of the frameworks.

In contrast to their level of expertise and familiarity and demand of the client, they can proceed. If a client has got any reference from his known circle, the developer has to incorporate what the client desire only.

Therefore, this point is crucial at the time of choosing a framework. Apparently, the demand for react.js has been going up and going down a little bit for angular.js.

Vue.js is growing as well for its specific convenient structure but, less than the main frameworks.

About Pros and cons and Advantages of Angular 5

Angular is superior JavaScript MVVM framework, launched in 2009, which builds up highly interactive and responsive web applications. It helps the developers for a long period regarding design and development of latest complex web application.

MVVM stands for Model View View Model. It also enables developers to work independently on the same application part through the same set of data.

Its complete documentation system allows receiving all required information for the individual developer without taking assistance from his/her senior team members. However, this needs more time for learning.

Some complex syntax comes from the first version of Angular. However, Angular.js 5 incorporates TypeScript 2.4 for easier learning. It may create migration issues at the time of transferring from old to new version.

About Pros and cons and advantages of React.js

Facebook launched React.js is also an open source JavaScript framework in 2013. Its more valuable for designing and developing huge web applications where data is changing regularly.

Flexible and easier to understand by developers

The developers find it easier to learn and implementation React.js because of its simplicity regarding syntax. The developers just have to apply their HTML coding skills and thats it. Similarly, the developers dont have to learn TypeScript likewise Angular. On the whole, the web application will have the top level of flexibility and great responsiveness.

VDOM refers to Virtual Document Object Model that enables arranging documents in XHTML, HTML, or XML formats into a tree model. The web browsers can access elements easily at the time of parsing different components of the web app.

The latest version of React.js

Most of the developers work on React 15 version with SVG attribute and lighter DOM, etc.

Recently in May-2018, Facebook has released React 16.4 version with many excellent features.

By combining with ES6/7, React.js can work with the maximum load in a smooth procedure. It has downward data binding system which means the child table data cannot affect parent data anymore.

It has 100% JavaScript library which gets huge new updates every day and accordingly developers can get the new facility. Its significantly light-weighted because the data interacting on the user side can be effortlessly represented on the server side at the same time. Facebook also provides codemods to automate the migration between different versions of React.

React.js doesnt keep the place for the appropriate documentation which may cause trouble to the team of developers. It also provides few options to choose by developers. It takes much time to become expert over React.js regarding integration of user interface with MVC framework.

About Pros and Cons and Advantages of Vue.js

It has several drawbacks like lack of crucial resources for complex web pages, the risk of flexibility and fixed Chinese background, Still, it needs to be modified.

In conclusion, the developers now must come to deciding stage according to their experience. They dont have to face any more confusion which framework needs to be taken in to process. Please feel free to add the comments if any query.

All You Need To Know About Artificial Intelligence