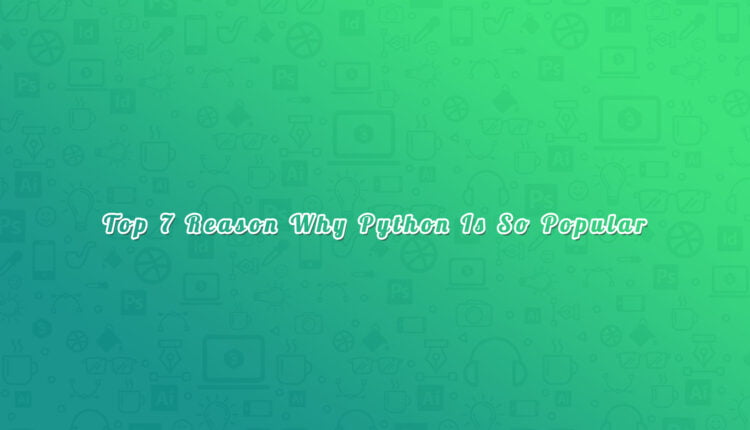 In this article, we will discuss Top 7 reason why Python is so popular. Python has proved itself as the best programming language. The drawbacks of Java, Perl, VB, C#, C and C++, etc., inspire programmers to move with Python. Latest Python version 3.5 optimizes the development method, syntax and scope up to a great extent. It also saves money and time and executes a high-quality output. Lets discuss the 7 significant reasons for using Python instead of all other programming languages.

In comparison to Java, C, C++, Tcl, Small talk, Perl and VB and other programming languages, the programmers need to use very fewer codes or syntax to get developed any particular program.

Since Python does not need much-written code, it enables developers to work fast; even a small size team can operate Python effectively. The impressive dialogue of Python is Less Time, Less Code and Less money. Hence, the cost of training and prior investment will be lesser than other programming languages.

Around 30% programmers use it on the OS like Linux, UNIX, Mac and Windows OS.  Its Interactive, modular, Interpreted, Dynamic, Object-oriented, portable and Higher level programming language, etc.

Now, the programmers incorporate Python to get developed games, frameworks, prototyping, and graphic design, etc. Because of its simplicity, high utility and powerful controlling capacity, Top level Development team always give the first choice to end-users for development of any high-quality web application.

It comes with high-level libraries including the Internet, string operations, web service tools, OS protocols, interfaces, and many more. Consequently, the developers take the opportunity to use all tools of Python to develop a complete and valuable Python program.

From libraries of Python, You will get helpful Notes on availability, Built-in Functions, Constants, and custom Constants by site module, Truth Value Testing, etc.

Find some Built-in Types functions are as follows:

For Boolean Operations you can use and, or, not and for Numeric Types, you can use functions int(), complex(), float().

Find some Iterator Types as follows:

Python integrates well with other C, C++ or Java through Jython. Its easier to develop various web services by calling up COBRA or COM components. Its calling method is direct and powerful to call other components. Python also incorporates XML, HTML and other languages to run on all modern OS with the same bytecode. Hence, it can integrate easily with other programming languages.

Its a great platform for the building of highly scalable and complex multi-protocol added network applications. Its easy to learn and code and you can make any critical assignment within a short period. For this reason, World class leaders and giant IT companies like Google, Spotify, Instagram, and Dropbox, etc. Also, end-users like NASA, Disney and Electronic Arts, etc., have made Python a major part of their systems, you may guess something.

Especially, data scientists have approved it for an easy and user-friendly application development. Hence, you can consider Python as the easiest, simple and powerful coding language for the modern customized web applications.

On the whole, both the development team and end-users gain confidence after going through the above article. They will go through Python for sure in order to develop any particular complex and valuable project or framework. From various social media sites and forums, you will surely get many successful feedbacks about the development and use of Python projects.

What is Python? Its features, Advantages, and limitations

How to Send SMS with AWS SNS using Lambda & Python